Spotlight on a FOI Mythbuster 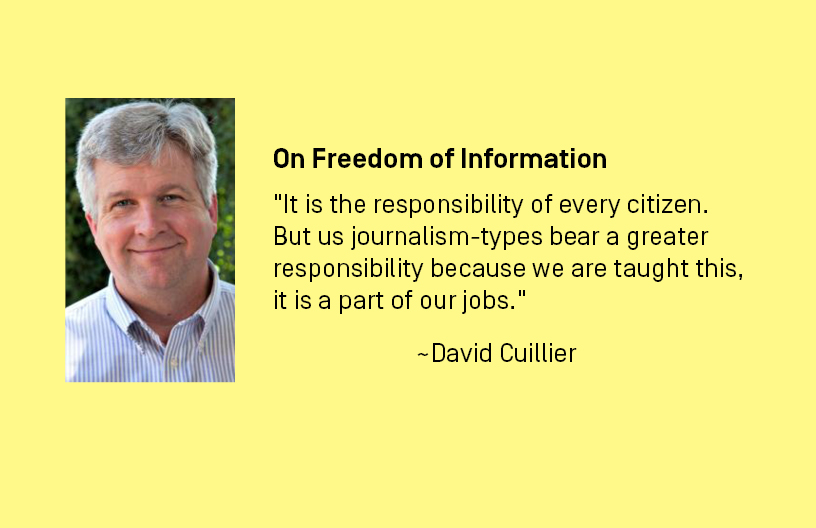 David Cuillier is a freedom of information mythbuster.

The journalism professor, former reporter and editor in the Pacific Northwest said although journalists can become irritated trying to get information out of government that frustration can be channeled into good outcomes.

Cuillier is a long-time defender and advocate for the Freedom of Information Act before state and federal lawmakers, civic and community groups, who teaches professional journalists and his students at the University of Arizona how to use it.

Journalists have a responsibility to teach others, including government officials, public records custodians and citizens, about the public’s right to government documents and files, he said.

“It is the responsibility of every citizen. But us journalism-types bear a greater responsibility because we are taught this, it is a part of our jobs,” he said.

“We know the value of it. It’s incumbent upon all of us to fight hard that this right is not lost. Journalists got FOIA passed in 1966. If we don’t keep that going, we’re all going to lose it.  Fewer news organizations are suing for records because of finances and fewer journalists are pushing back because they are stretched thin.”

“We are headed into a bad situation if we don’t hold the line,” he said.

Here are some of assumptions and mistakes people make:

He said the best records are buried in computers and file cabinets in government offices.  “You have to physically walk, drive or scooter down to the offices and talk to the people in person to find out what they have and what they do with it. That’s when you get a handle on information that’s valuable.”

He said government records custodians are winging it when they dismiss document requests. Those who take those pat refusals at face value and walk away are making “a huge mistake.”

A class exercise where his students research a house for sale puts the rudiments he teaches into practice. He said students who succeed feel empowered.

“It’s like a muscle and the more we exercise it, the stronger it gets. It is something we should do every day and integrate into our reporting and then it becomes second nature. “

The dividend is the reporting deepens and improves while public officials become trained to understand the laws, be more open or, at least, to know journalists (and citizens) aren’t going to take ‘no’ for an answer.

He proposed the Freedom of Information Act and how to use it should be taught in schools. He pointed out the state of Sinaloa requires teaching Mexico’s open records laws in kindergarten through 12th grade.

“If we had that in the United States then everybody in America would appreciate public information, government information, would know how to go get it and we would have a more robust civic-minded society. If Mexico can do it, can’t we? Is that too much to ask?”

He would like to see journalism organizations team with public libraries to disseminate public information and help people research and access public documents.

“This is a great avenue for us to reach the public and partner and even diversify our revenue streams and our support system,” he said.

“I think we have to be creative and think of ways that we can take what we do well and that is acquiring information, vetting it, critically evaluating it, distilling the gist of it that’s important and communicating it effectively. We can apply that in a variety of different ways beyond just newsprint, broadcast or the internet.”

Cuillier, who holds a doctorate from Washington State University and teaches journalism at the University of Arizona School of Journalism, is president of the National Freedom of Information Coalition. He is also a 1988 alumnus of the Dow Jones News Fund’s copy editing internship program spending that summer at The Detroit Free Press.

He called the internship and Ohio State University boot camp with Dr. John Clarke one of his best experiences. “For a little farm boy from Washington state to get to spend time in Detroit, it was amazing.”

He was rotated through the newsroom and recalled a host of great co-workers and getting yelled at by Mitch Albom for editing his column.

The second edition of his book,  “The Art of Access: Strategies for Acquiring Public Records,” co-written with Charles N. Davis of the University of Georgia, was published this year.