Virginian is 2010 High School Journalism Teacher of the Year 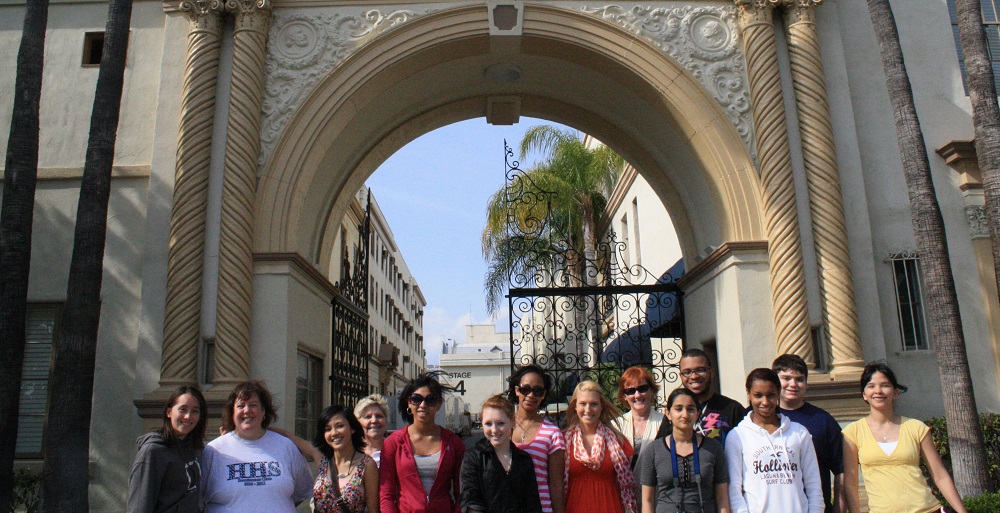 Valerie Kibler (second from left) with her students at Paramount Pictures in Los Angeles.

Richard S. Holden, executive director of the Fund, said, “Valerie’s accomplishments are as impressive as her commitment to her students and lifelong learning. She aims to teach them communication skills that will serve them throughout their lives. ”

In talking about her platform, Mrs. Kibler said she plans to promote diversity. “The first thing that comes to my mind is that every person has a story,” she said. “I try to make it apply to the people on staff, too. We always attract such an eclectic group of people who aren’t friends in the hall necessarily but the things that they do as a staff create a bond.”

Mrs. Kibler was local chair of the record-setting 2009 fall National High School Journalism Convention in Washington, D.C., coordinating a large, regional committee to pull a spectacular program into place. She had been director of the Virginia Association of Journalism Teachers and Advisers for six years. She serves as its treasurer and is state director for the Journalism Education Association from which she earned certified journalism educator status.

The Teacher of the Year program honors the nation’s top journalism teacher, four Distinguished Advisers and several teachers cited as Special Recognition award winners. A panel selected Mrs. Kibler and eight other teachers based on submissions by 26 teachers that included their student publications, résumés, letters of recommendation and responses to 14 questions. She was a DJNF Special Recognition Adviser in 2006 and a Distinguished Adviser in 2007.

The panelists were: Paul Kandell, 2009 National High School Journalism Teacher of the Year, Palo Alto (Calif.) High School; Edmund Sullivan, executive director, Columbia Scholastic Press Association, a program sponsor; Dr. Vanessa Shelton, executive director of Quill and Scroll, a professor at the University of Iowa and head of the scholastic division of the Association for Education in Journalism and Mass Communication, and Diana Mitsu Klos, senior projects director at the American Society of News Editors and a member of the Fund’s board of directors.

The Teacher of the Year and four Distinguished Advisers will receive free subscriptions to The Wall Street Journal Classroom Edition, a co-sponsor, which includes 30 copies of the full-color newspaper for students, a free Teacher Guide, unlimited access to the Classroom Edition website and a daily Journal. Poynter Institute will also give the top teachers and their students access to webinars through its NewsU training project.

Mrs. Kibler has been advising media for 18 years and teaching since graduating from Virginia Polytechnic Institute in 1988 with a B.A. in English. She came to Harrisonburg in 1998 after teaching English and Journalism, sponsoring the Student Council Association and coaching the girls’ volleyball team at Marion (Va.) Senior High School. She sponsors the Student Council Association at Harrisonburg.

In addition to journalism, she teaches Advanced Placement English Language & Composition with an Intensive Journalistic Writing focus. She started the course after attending an IJW seminar in 2008 taught by former Teachers of the Year, Alan Weintraut, 2006, and Carol Lange, 1991. She also teaches Pre-AP English for the Virtual High School, an online program with international reach offering advanced placement and International Baccalaureate courses.

Mrs. Kibler is a Renaissance/Leadership teacher. A sought-after speaker and judge, she is a member of several professional journalism associations. She serves on the Southern Interscholastic Press Association’s Advisory Board and won SIPA’s Distinguished Adviser Award this year. She has taken numerous graduate-level and other courses and attended the ASNE Advisors Institute at Hampton University.