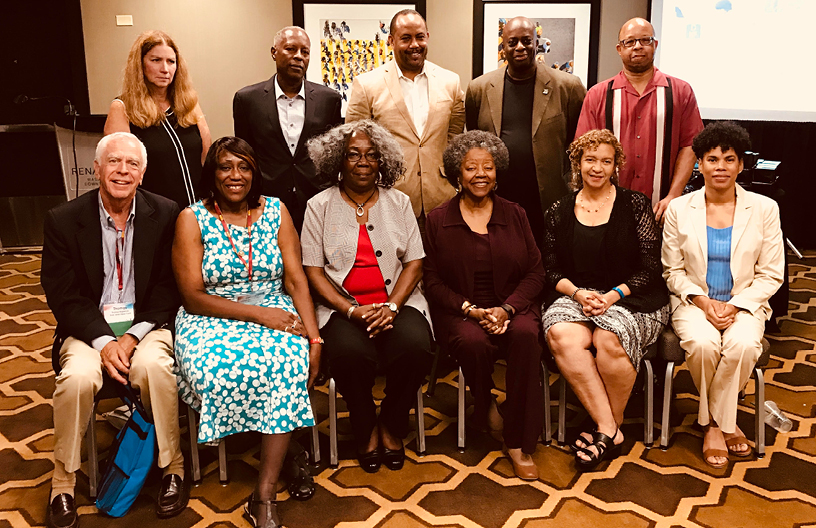 PRINCETON, N.J. — Fifty years after attending an experimental summer journalism workshop at American University, four members of that program met in Washington, D.C., for a panel about the program. The project started just months after the Kerner Commission Report cited media discrimination against blacks as a factor in urban riots and prescribed journalism training for high school students among the solutions.

Marilyn McColl Salmon, Lenora Fuller McCall, Cecil Brathwaite and Dr. Angela Beemer spent two weeks in 1968 covering the Poor People’s March, staying on the campus, visiting The Washington Post newsroom and publishing a newspaper, The Urban Voice. Each told the audience what the workshop meant to them and their careers. Though none pursued journalism professionally, they were part of a movement that started with 16 other students, two of whom became journalists.

At the program’s peak, DJNF co-sponsored more than 30 workshops across the country each summer serving as many as 12,000 aspiring journalists. It supported seven summer journalism workshops in 2018.

Engleman said, “The notion back 50 years ago was the News(paper) Fund had some money. ‘We can sponsor this but we can’t do this alone. We need the newspaper business, the publishers, to be involved in this.’ ”

Co-sponsors joining with American were The Washington Star, The Washington Post and the D.C chapter of Theta Sigma Phi, now known as the Association for Women in Communications.

“Newspapers did this work because they knew it was important to do and it was the right thing to do,” he said.

American hosted the summer workshop until 1973. It continues to support a month-long springtime program run by the Washington Association of Black Journalists (WABJ).

Shiver was recruited for the American workshop by a speaker at his school who intrigued him so much that he drove to the man’s office. Meeting revered news anchor Jim Vance, writing and doing radio interviews was a dynamic way to spend the summer before heading off to college.

“The whole experience convinced me even more that that’s what I wanted to do,” he said.

He went to Syracuse University and was a copy messenger at The Washington Post during Watergate.

“I interviewed Bob Woodward and Carl Bernstein and that was the first piece I got paid for so I said, ‘I kind of like this journalism thing,’ ” Shiver said.

During his career, Shiver worked for the Wilmington News Journal, The Washington Star, USA Today and the Los Angeles Times.

Daniels, a former broadcast journalist, now assistant dean of the School of Journalism at the University of Alabama, Tuscaloosa, said the workshop was what he needed.

He wrote a story based on a mock press conference that earned him an award for the best story under deadline pressure at the workshop’s closing banquet.

“And that was huge, to tell me that, ‘Hey, you can do this.’ It was the single best experience of my life in terms of building my confidence that I could do journalism as a career,” he said.

Among other workshop alumni:

Daniels, who has conducted studies of previous workshops, called for research on the programs’ impact today.

Workshop alumni who were unable to attend can send their recollections to linda.shockley@dowjones.com for a 50th anniversary workshop roundup.