Teacher of the Year Scholarships 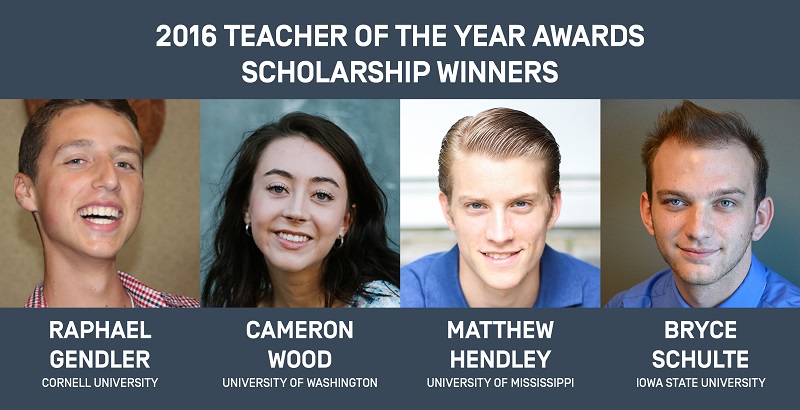 PRINCETON, NEW JERSEY — The Dow Jones News Fund will award $2,500 in scholarships to four recent high school graduates who will pursue journalism in college this fall.

The scholarship recipients were selected in honor of the 2016 National High School Journalism Teacher of the Year and three Distinguished Advisers through writing contests organized by the teachers at their high schools in April and May.

The top scholarship recipient is Raphael Gendler of St. Louis Park (Minnesota) High School, where Lori Keekley, 2016 Teacher of the Year, teaches and advises The Echo. Gendler will receive a $1,000 scholarship to attend Cornell University in the fall.

Gendler covered a presentation by Abby Simons, Public Safety Team Leader for the Minneapolis Star Tribune, whose team of seven reporters covers crime and courts in the Minneapolis-St. Paul metro area. She directed coverage in the aftermath of the police shooting of Philando Castile. Simons spoke to students about police shootings and journalism in the age of Twitter.

The following students of 2016 Distinguished Advisers will receive $500 scholarships.

Cameron Wood of Wenachtee (Washington) High School will attend the University of Washington, Seattle. Her adviser David Riggs arranged a talk by Wenatchee High School alumna and journalist Holly Thorpe who reflected on her journalism career and opportunities for future journalists.

Matthew Hendley of Madison, Mississippi, will attend the University of Mississippi. His adviser was Terry Cassreino. Hendley wrote about author and syndicated cartoonist Marshall Ramsey who visited St. Joseph Catholic School to offer advice to the next generation.

Bryce Schulte of Des Moines, Iowa, will attend Iowa State University. His adviser was Leslie Shipp at Johnston High School. Schulte wrote an opinion piece for the school newspaper about suicide prevention and the need for more counseling and resources for male students.