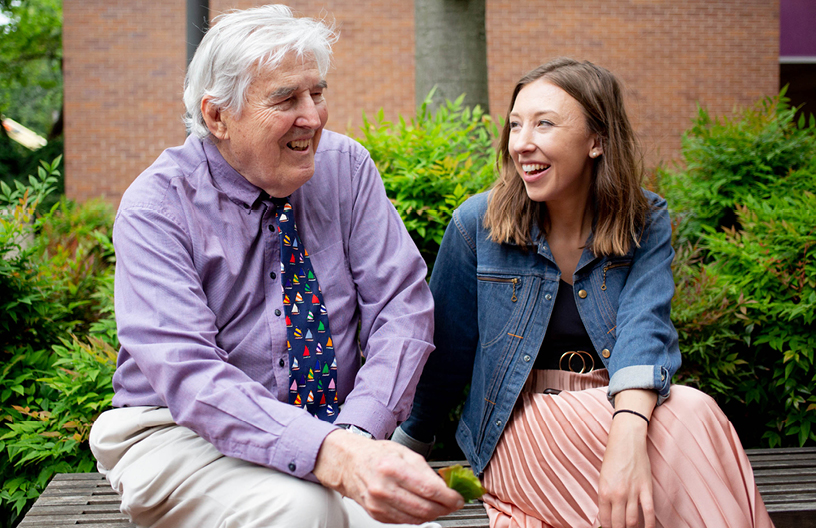 PRINCETON, N.J. — Allison Swenson, a 2019 Dow Jones News Fund multiplatform editing intern at the Associated Press, is the 16th Edward Trayes Scholar. She was selected by the professor who has directed the training program at Temple University for 52 years.

Trayes praised Swenson for her professional bearing and attitude throughout the Temple residency program. He said her day-by-day performance was consistently among those at the top. She was very engaged, asked good questions and she was motivated to learn as much as possible.

“It is all of the above plus her other professional and personal qualities that put her solidly in the company of previous recipients of the Edward Trayes Scholar Award. She has the intellect and skill sets to succeed in today’s world of journalism, wherever she may go,” said Trayes.

“I don’t know if there is anything that could have been more helpful for me going into an AP internship,” Swenson said of her time with Dr. Trayes, who had her class memorize the entire stylebook.

“It was a very demanding week, but rewarding at the end. We learned a lot in a short period of time.”

Swenson wrote of her experience: “In my summer at the AP, I got to edit some of the top stories of the day and press the button on mobile alerts that were pushed to phones globally. I also got to report on some of the biggest news of the summer, from the Jeffrey Epstein case to the U.S. women’s national soccer team’s ticker-tape parade and even the Coney Island hot dog eating contest on Fourth of July.”

“Ali absolutely thrived in her role as an editing desk intern. Her news judgment, AP style knowledge and communication skills with reporters were very impressive. She felt like a regular, longtime member of our team, not just a temporary summer editor.”

As the Trayes Scholar, Swenson received a $1,000 scholarship endowed by the O’Toole Family Foundation of Short Hills, New Jersey, which began the scholarships in 2004 to honor Trayes. Paula and Terry O’Toole, a 1979 copy editing intern at The Wall Street Journal, have donated a total of $20,000.

After her internship, Swenson received a six-month Voice Media Group Fellowship at Phoenix New Times where she works on a mix of quick daily stories and long-form, investigative news features. When her fellowship ends in March, she is open to reporting and editing jobs nationwide.

Swenson received an undergraduate degree in psychology from Loyola Marymount University in 2016 before earning a master’s degree in journalism from Columbia last May.

Her previous journalism experience includes a content editor position for an educational program; an associate social media editor at the Los Angeles Times, where she managed the opinion section’s social media presence and wrote blogs; an internship at Participant Media; four years on the Los Angeles Loyolan staff, including one as editor in chief; and publisher, reporter, editor and graphic designer for her family newspaper at age seven.