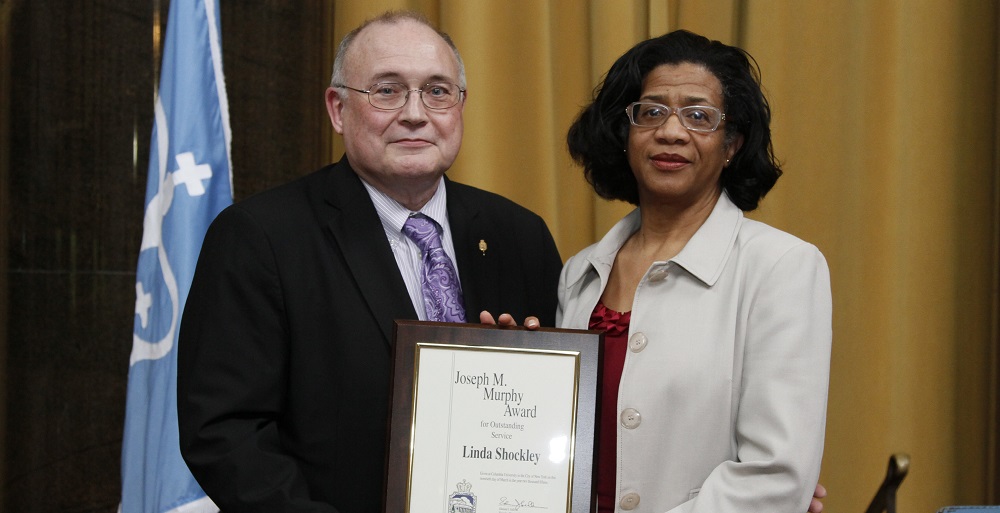 NEW YORK CITY — Linda Shockley, managing director of the Dow Jones News Fund, was presented with the Joseph M. Murphy Award for Outstanding Service by the Columbia Scholastic Press Association (CSPA). Shockley was honored for more than two decades of committed service to student journalism at both the high school and college levels.

“Whether it was fostering projects to promote diversity in newsrooms, advocating for student journalists and advisers or providing education opportunities for both, Shockley has been a torch bearer for the message that the future of journalism is in our high schools today and that journalism does matter,” said Edmund J. Sullivan, executive director of the Association.

The Murphy Award was given in New York on March 20, 2015 during the CSPA’s 91st annual spring convention. The award was presented during a luncheon at Low Library Rotunda on Columbia University’s campus.

Named for Joseph M. Murphy, the founding director of the CSPA, the Award honors a single person who has earned the highest respect of the Association for his or her actions serving student journalism.

Writing in support of her nomination, Richard Levine, president of the Dow Jones News Fund said, “No honor for Linda Shockley could be more deserving or appropriate than the Joseph M. Murphy Award. Linda has played a major role in fostering scholastic journalism and promoting diversity in newsrooms during a quarter century with the Dow Jones News Fund. Much of her time, energy and talent has been devoted to overseeing the Fund’s scholastic programs: summer High School Journalism Workshops, the National High School Journalism Teacher of the Year awards and Adviser Update, a quarterly newspaper for journalism instructors.”

Further praise for Shockley’s service came from Ellen Austin, Director of Journalism at The Harker School in San Jose, California and a former Dow Jones National Journalism Teacher of the Year. Austin said, “Linda has been tenacious for decades in her support of student journalism, yet does it in with a graciousness, soft humor, and kindness and respect for each person she speaks with. Having said that, however, make no mistake that she is also an advocate and fighter for ensuring that diverse voices are represented in our school publication staffs and in our professional newsrooms. And she believes in the future of journalism, and that our young people are key to that future.”

Finally, George Taylor, a former high school adviser and also a former Dow Jones National Journalism Teacher of the Year, who serves as editor of Adviser Update for the Fund, described her contributions in this way: “In the nearly 20 years we have been working together, I have found Linda to be a passionate advocate of quality journalism both in terms of the product we produce (Adviser Update) and in the programs the News Fund supports.”

The CSPA is an international student press association uniting student journalists and faculty advisers at schools and colleges through educational conferences, idea exchanges and award programs. Owned and operated by Columbia University since 1925, the Association offers three major services: annual competitions and awards for members, including the Crown Awards; planning two conventions (one national, one regional) and a week-long summer workshop at Columbia; plus small press publishing activities to support its work.