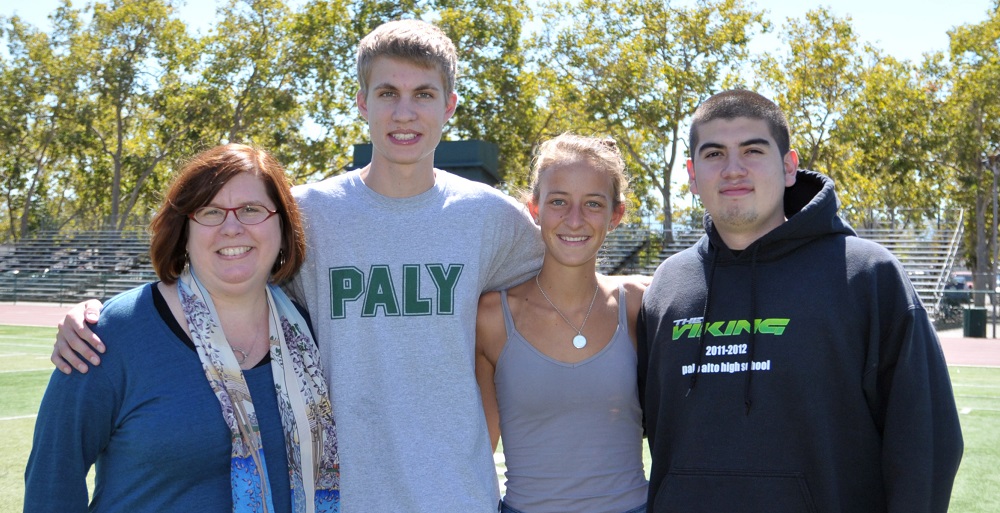 Richard S. Holden, executive director of the Fund, said, “When I spoke with Ellen to tell her that she had won the award, she said she never thought that her name would be tied to the teachers that she so admires and that had inspired her. I assured her that teachers 20 years from now would be saying the same thing about her.”

Ms. Austin has been teaching and advising media for 13 years after leaving a career in marketing to take a job in a rural Minnesota public high school where she started the school newspaper. She joined the staff at Palo Alto in 2007 after teaching English and journalism at a small private school in St. Paul. She recalled being asked in the job interview how comfortable she would be letting student journalists call the shots. Her previous experiences included censorship, prior review and battling to keep the paper alive.

“I believe the First Amendment is embedded in the pores in the walls of American schools,” she said.

She moved across country to take the job at Paly as the school is known. She lauded support for student press rights in California that strengthens many of its scholastic journalism programs.

“I often wonder if this is what all of America would look like right now if it weren’t for Hazelwood. Hazelwood (vs. Kuhlmeier) helped turn out the lights on the right to student free expression,” she said.

Ms. Austin plans to make inclusion the central message of her year as a spokesperson for scholastic journalism.

“Who are we speaking to outside the newsrooms and into whose hands are we putting our words and images? Are we doing our jobs to reach more ears, eyes and hearts?” she asked.

Some may view Paly as an extension of the icons of Silicon Valley – Facebook, Yahoo, Google.

“Our job as journalists is not to make snap judgments,” she said.

Ethnic, linguistic and economic diversity are reality in Palo Alto with students coming from households where Korean, Mandarin, Farsi, Russian, Tongan and Spanish are spoken.

“It’s a 21st Century redefinition of the American melting pot,” she said.

“Whether it’s rural poverty and the loss of a farm or urban poverty and the challenges in our cities, both situations cause gaps for children that must be bridged,” she said.

The journalism program at Palo Alto is part of the English department. Ms. Austin’s colleagues include Esther Wojcicki, senior faculty member, and Mike McNulty, her co-adviser for INfocus. Colleague Paul Kandell, who advises the newspaper and its companion websites, was named the 2009 National High School Journalism Teacher of the Year; this is the first time in the award’s history that a school has had two national winners.

“Here I’m not just the journalism adviser but part of a fleet!” she said.

Mr. Kandell wrote in recommending Ms. Austin for the award, “If scholastic journalism can be called an industry, and an industry on the cusp of radical technological change, Ellen has shown herself to be a visionary industry leader. It was only three years ago that I was selected as the Teacher of the Year, at least partly, on the basis of the strength of my online journalism work, but looking at what Ellen has done since makes me look like a technological dinosaur.”

A panel selected Ms. Austin, four Distinguished Advisers and three Special Recognition Advisers based on submissions that included their student publications, résumés, letters of recommendation and responses to 12 questions. The panelists were Aaron Manfull, 2011 National High School Journalism Teacher of the Year, Francis Howell North High School, St. Charles, Mo.; Dr. David Bulla, a professor at Zayed University, Abu-Dhabi, United Arab Emirates, and head of the scholastic division of the Association for Education in Journalism and Mass Communication; Kelly Furnas, executive director of the Journalism Education Association, and Diana Mitsu Klos, former senior projects director at the American Society of News Editors and a member of the Fund’s board of directors.

Ms. Austin will receive her award at the November National High School Journalism convention in San Antonio. She will also attend the college-level journalism educators’ conference in August. The Teacher of the Year is also featured at CSPA, a co-sponsor, in New York City each March. Additionally, she can attend a professional-level seminar offered at the Poynter Institute for Media Studies, St. Petersburg, Fla., and is a paid columnist for Adviser Update. A senior at Palo Alto Senior High School will receive a $1,000 college scholarship to pursue journalism studies.

Mr. Furnas wrote Ms. Austin has “a sustained history of excellence and continuing to provide students with rich, meaningful journalism experiences.” Dr. Bulla called her “first-rate all the way.”

“She constantly figures out creative ways to advance the work of the SPLC, even organizing her students to film a YouTube ‘public service announcement’ that promotes our anti-censorship work. Her work ethic is tireless and her creativity is boundless.”

Ms. Austin is a graduate of the University of Illinois with a B.S. in marketing. She holds an M.Ed. in Secondary English from the University of Minnesota. She spent two years in a Fulbright Teaching Assistantship in Vienna teaching English as s foreign language in the Austrian school system at all levels of proficiency. She maintained her own photography studio in St. Paul for 10 years specializing in neighborhoods, towns and villages spanning South Africa, the Midwest, the South and Western Europe.

Her solo exhibits in the Midwest explored the themes of apartheid, community, aging and diversity. She was the 2011 California Journalism Educator of the Year and a Journalism Education Association Rising Star Award winner in 2006. She serves on the board of the Journalism Education Association, Northern California, was director of JEA’s southwest region from 2008 to 2011 and received grants to study in Central America, to study journalism education, to publish student newspapers and to promote cross-cultural educational exchanges between the United States and Austria.

Ms. Austin spent four weeks this summer in London studying Chaucer’s life and work as one of 16 recipients of a grant from the National Endowment for the Humanities. She teaches British Literature at Paly. Explaining why she pursued the program, she cited her need to study central canonical works.

“Journalism is the business of words and language, so is literature. They are first cousins in the same family.”

She said the class work and the pilgrimage to Canterbury informed her teaching. She no longer feels like she is “conducting an orchestra in the dark.”

“Chaucer had keen observation skills. It was like reading the notes of a reporter who is writing a profile,” she said.

Her mother, Jane Austin, who continues to teach at age 78 once told her she would make a great teacher; so did her colleagues in Vienna. Though she didn’t respond right away, Ms. Austin said she believes she was called to teach.

“If there is a calling for something else or if I have given my service in full measure, I would move on. Right now I don’t think my work is finished yet. I hope there is still more work ahead with wonderful kids.”