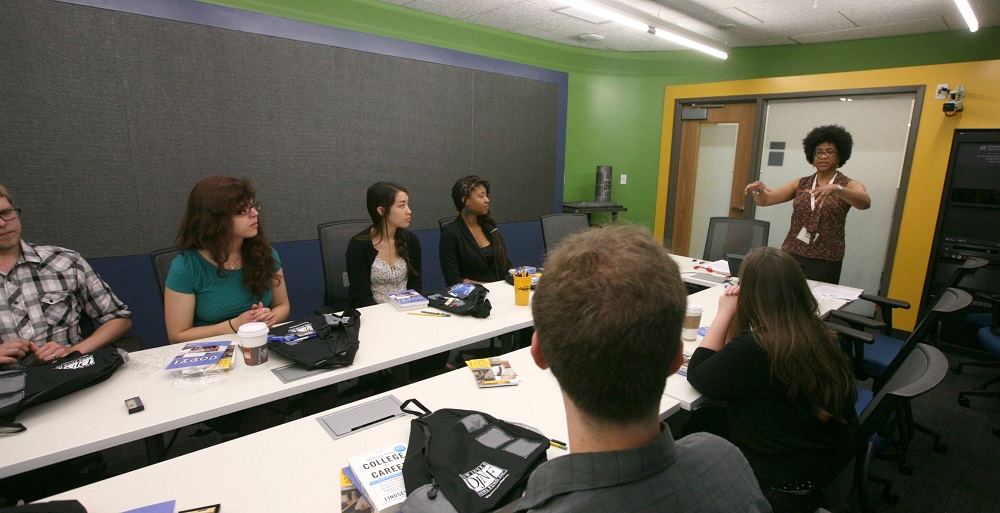 Linda Shockley talks with interns on the first full class day at the Center for Editing Excellence at the University of Texas, Austin. Photo by Bradley Wilson

PRINCETON, N.J. — The Dow Jones News Fund announced the appointment of Linda Shockley as managing director of the Fund, a nonprofit that encourages high school and college students to pursue careers in journalism by sponsoring summer workshops and providing internships.

Ms. Shockley has been deputy director of the Fund since 1992, four years after joining as assistant to the director.

Richard J. Levine, president of the Fund’s board of directors, said: “Linda has led the Fund with a sure hand since April. The depth and breadth of her experience in almost all aspects of the Fund’s work and her passionate commitment to its mission of promoting journalism careers among students and helping diversify the nation’s newsrooms will be invaluable in her new role.

“While her background is in print journalism, Linda has acquired a broad range of digital skills. This combination will enable her to strengthen and expand the Fund’s digital programs while maintaining quality instruction in the basics of journalism — accurate and unbiased reporting, clear and compelling writing and superb copy editing.”

During her quarter century with the Fund, Ms. Shockley’s primary responsibilities included managing the Fund’s support of summer high school journalism workshops to promote diversity and overseeing the business reporting internship program since its inception in 1995. She has also been responsible for Adviser Update, the quarterly newspaper for high school media teachers, alumni relations and the National High School Journalism Teacher of the Year program.

Before joining the Fund, she spent more than 12 years as an education reporter, news editor, bureau chief, columnist and city editor at what was then Gannett Suburban Newspapers in Westchester County, New York.