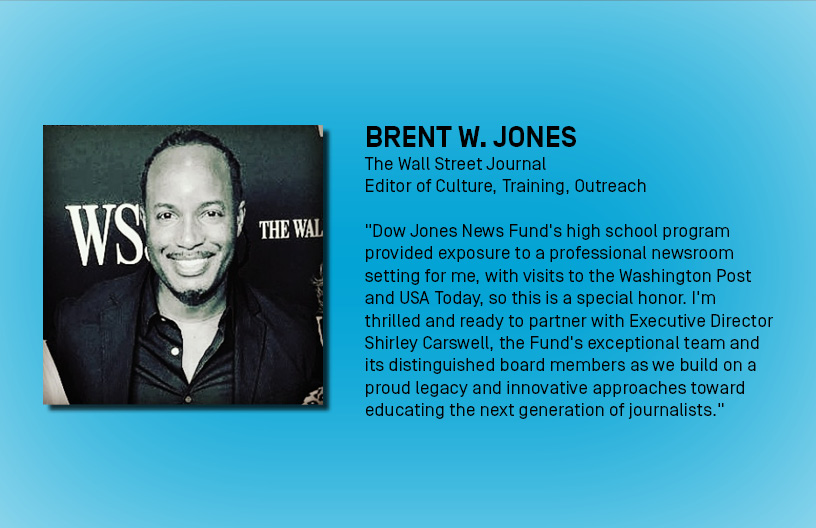 PRINCETON, N.J. — The Dow Jones News Fund announced the election of Brent W. Jones, editor of culture, training and outreach at The Wall Street Journal, as president of the Fund’s board of directors. He succeeds Richard J. Levine, former Dow Jones vice president of news and staff development, who served as board president for 16 years.

Jones is an award-winning newsroom executive with more than two decades of journalism experience, including guiding standards and ethics, training, outreach and diversity initiatives for national and local newsrooms.

Jones was introduced to the News Fund as a teenager when he attended a high school workshop at Howard University sponsored by DJNF.

“Brent’s experience as a journalist, his passion for education and service, and his introduction as a high-school student to the News Fund made him the perfect candidate to take the helm as president,” said Karen Pensiero, managing editor of The Wall Street Journal and a member of the board’s nominating committee.

Following the board’s unanimous vote, Jones thanked Levine for his leadership and reflected on the News Fund’s impact on his own career path.

“Dow Jones News Fund’s high school program provided exposure to a professional newsroom setting for me, with visits to the Washington Post and USA Today, so this is a special honor. I’m thrilled and ready to partner with Executive Director Shirley Carswell, the Fund’s exceptional team and its distinguished board members as we build on a proud legacy and innovative approaches toward educating the next generation of journalists,” said Jones.

At the Journal, Jones is driving a culture change in the newsroom and in business journalism. Since 2019 he has anchored weekly training sessions; helped coordinate and elevate the newsroom’s presence at conferences that focus on digital news, investigative journalism and newsroom diversity; reinvented newsroom orientation; and served as architect of the Journal’s groundbreaking campus partnership training programs with Morgan State University in Baltimore and Lehman College in the Bronx, New York.

Before joining the Journal in early 2018, Jones spent nearly 20 years at Gannett in a wide variety of roles. In his last position, he served as senior director of Standards & Practices at Gannett’s USA Today Network, responsible for guiding journalism best practices, diversity outreach and student programming for the content division.

As standards editor for USA Today, he created, produced and hosted the publication’s first media ethics podcast, Off the Record, a monthly program that focused on ethical considerations related to news coverage. He ran USA Today’s year-round flagship internship program. He also held a number of editing roles at USA Today and local papers.

Levine, who will remain on the board as a director, said: “I can’t imagine anyone better qualified than Brent to lead the News Fund at this moment, when the Fund’s mission to promote journalism careers and its vision of newsrooms that reflect America’s growing diversity have never been more important.”

Levine joined Dow Jones in 1966 as a reporter in The Wall Street Journal Washington bureau, and became a correspondent and columnist before moving into management in 1980. Among the roles he held were vice president and executive editor of Dow Jones Newswires and member of the Dow Jones management committee.

Elected president of the Fund in 2005, he oversaw the transformation of the News Fund in the digital age and helped steer it through a tumultuous period that included the adverse effects of digital media on print advertising revenue, the great recession and a global pandemic. When traditional newsroom staffs shrunk significantly, the News Fund moved aggressively to attract new media partners and minimize the impact on the Fund’s flagship professional summer internship program, of which he is an alumnus. The Fund’s effort to diversify the nation’s newsrooms also intensified during Levine’s tenure. This year’s internship class set a record, with more than 60 percent interns of color.

Jones serves on the advisory boards of the Freedom Forum and International Center for Journalists. He is a graduate of the University of Maryland, College Park.