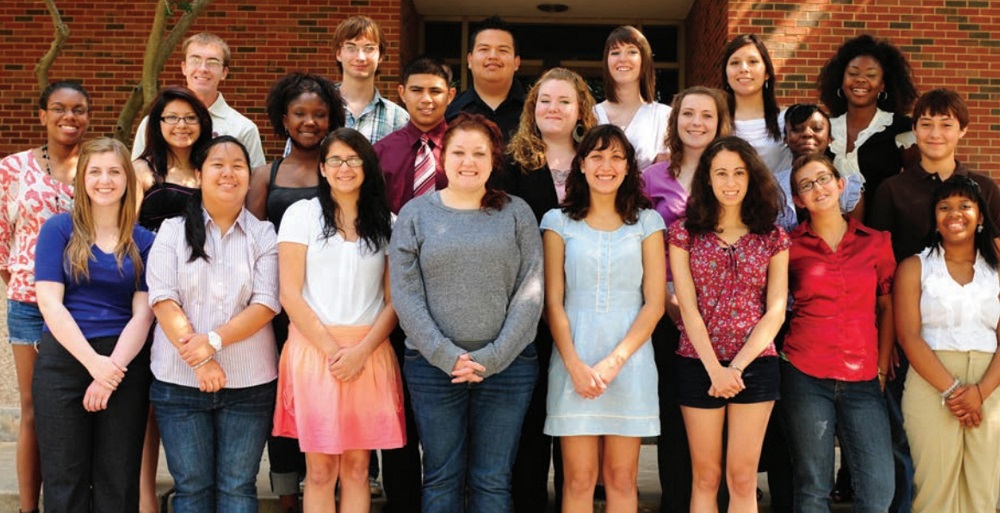 The winners were selected by DJNF staff from among more than 475 participants in 25 summer workshops co-sponsored by colleges, universities, non-profit and journalists’ organizations. The students’ work appeared in printed newspapers or news websites produced by the programs.

Rich Holden, DJNF executive director, said, “These winners, no matter the medium, share an ability to communicate, whether through photography, the written word or multimedia. We’re delighted to encourage them with this recognition.”

Miranda Sanchez wrote about a delayed settlement between Native American trust account holders and the U.S. government for the Red Dirt Journal produced by workshoppers at the Oklahoma Institute for Journalism Diversity at the University of Oklahoma in Norman.

The story detailed how the U.S. Senate continued to put off paying a settlement to American Indians by wrapping provisions for payment into jobs and tax-loophole bills. The lawsuit was filed in 1996 by Elouise Cobell, a member of the Blackfeet Nation, because the government was unable to account for American Indian trust funds, money that was set aside starting in 1887 because of the division of reservation lands into individual plots. More than $1 billion is at stake.

Sanchez took on a complex story with as many twists and turns as American history, interviewed a congressman and other public officials and hunted for individuals who owned the accounts. She wrote in her essay, “Many phone calls led to dead ends. It was those dead ends that pushed me to further my search for leads and spend extra hours researching the topic and the people it would involve.”

She succeeded and told a comprehensible and compelling story. Ray Chavez directs the workshop at Oklahoma.

Faculty called her a “one-woman dynamo” because after tackling her own complicated story she helped other fellows by shooting photographs and videotape for their stories.

Jaime Real of East Palo Alto, Calif., tells the story of undocumented students determined to graduate from college for the Mosaic at the California Chicano News Media Association workshop at San Jose State University. The result, “For undocumented students, a special struggle: Challenges are financial, social and cultural,” crystallizes the question of immigration status as a significant factor in how these students pursue higher education, financial help and even their social lives.

Joe Rodriguez, the workshop director said, “Jaime arrived thoroughly prepared to do the hard-to-get story. He got undocumented students to speak on the record and wrote a balanced story.”

In his essay, Real wrote about journalism as a way to shine a spotlight on truth.

“The world has so many flaws but the people of the world, the eyes of the world have gone blind. By the time I’m done with it the world will know what it truly means to have eyes.”

Journalism in July at the University of Texas, El Paso, brought Genaro Cruz Martinez to the campus from Juarez, Mexico, on what he calls a long journey to a future that opens people’s eyes. He attends El Paso Community College.

His article, “Indios – A beacon of light for Cuidad Juarez,” highlighted how residents of his drug-war ravished city find temporary relief in their favorite team’s exploits on the soccer field. He enhanced his online article with video of the fan frenzy.

He wrote in his essay, “I want the world to know that even while living in the most dangerous city in the world, there are still people that want to make a change, and that I will continue to work for a change.”

Ashley Stevenson wrote a thorough story on how agencies and schools attempt to serve the needs of homeless students for The Chronicle at the Journalism Diversity Workshop for Arizona High School Students at the University of Arizona, Tucson. Her article, “Schools, agencies help homeless students,” was packaged with a sidebar of statistics, phone numbers, websites and addresses of helpful agencies.

Stevenson wrote in her essay that she drove all over Tucson looking for sources, searching for that teen to help bring her story together. She found that girl, a young mother who was finishing high school while raising her child, and distilled “her fear, pain and strength” into a news story.

Now attending community college, Stevenson aspires to become a columnist one day. Her mission is “empowering women from all walks of this earth by relating to them and speaking for them. I want to help make this world more open-minded with the words that I write.”

Lisa Button, workshop director, said, “Ashley Stevenson was committed to the idea of covering homeless youth in Tucson. Finding sources and tracking down busy social workers were not impediments. She rewrote and rewrote until she ended up with a solid story and useful sidebar.”

The Bay Area Multimedia Academy at San Francisco State University nominated photography winner Beatrice Esteban. She captured dramatic photos of demonstrations by opposing sides over a fatal police shooting at a BART station in Oakland, Calif. The BART officer, Johannes Mesherle, was convicted of involuntary manslaughter in the shooting of 22-year-old Oscar Grant. The former officer’s supporters carried placards while protesters lay down in the street portraying the man who was slain.

Esteban is editor-in-chief of The James Logan Courier in her senior year at James Logan High School in Union City, Calif.

BAMMA staffers, wrote, “Beatrice covered an intense rally in support of a police officer who shot and killed an unarmed man. We weren’t surprised at all to see her bring back some amazing photos from what may be the most important social justice case of her generation.”

Esteban wrote the two-week workshop developed the foundation she’ll need to pursue a serious journalism career. “Deadlines were thrust at me, my first story idea failed, and the problems seemed endless, but I ended up providing a meaningful contribution to the Golden Gate [X]Press 2.0 and emerged with indispensible lessons about journalism.”

The workshop was directed by Dr. Cristina Azocar.

Roberto Portal of Miami Killian Senior High School framed a sweet portrait of a young Haitian-American girl for Miami Montage, the workshop newspaper produced by participants at the James Ansin/Peace Sullivan High School Journalism Workshop. The paper’s theme was “Haiti, South Florida and the earthquake.” The photograph was part of a center spread.

Portal credited his grandfather, a photographer, with starting him early in his pursuit. He is president of the Quill and Scroll chapter at his school and sports editor for the newspaper and yearbook. He is also a freelancer for Teen Link South Florida. He plans to focus his journalism career on photography and print and plans to also study linguistics.

His nominators wrote, “Roberto went to Little Haiti, conquered the language barrier and produced this portrait. He had six photos in the paper.”

John Stoltenborg of Felix Varela Senior High School in Miami won for his multimedia piece, “The healing power of football,” about a resettled teen coping with his father’s death in the Haitian quake by playing football.

The staff called Stoltenborg’s work, “A compelling story of a Haitian-American teen coping with his father’s death by playing football and doing it well.”

Stoltenborg described his enlightenment about the best uses of video after meeting Les Rose of CBS.

“I realized I had been going down the wrong path. He, in his work, found a story and turned it into an emotional rollercoaster.”

“I want the responsibility of delivering information daily that will change people’s lives. I want to be the one they trust, the one known for getting it right every time,” he wrote.

View his video at http://workshop.com.miami.edu/2010/videos/

Yves Colon of the University of Miami directed the workshop.

Alan Sadler of Suncoast Community High School in Rivero Beach, Fla., attended the Urban Journalism Workshop at the University of Missouri, Columbia. He won for his multimedia project for the Urban Pioneer, “Hispanics Make Transition to mid-Missouri,” published by the Columbia Missourian. He also produced a Spanish-language version.

Nominator Levon Putney, WCBS 880 news reporter in New York, wrote, “It was impressive enough to see the ease with which Alan handled interviewing sources and putting his story into focus, but the high school senior’s ability to also create an engaging narrative made Alan’s piece shine. He then buffed the shine and made it brighter with a Spanish translation. Alan earned the nomination. But, his talent for storytelling already won my respect. “

Sadler is the sports editor for his school paper, The Legend, and an intern at ESPN 760 Radio, West Palm Beach.

Anna Romero of the University of Missouri directed the workshop.