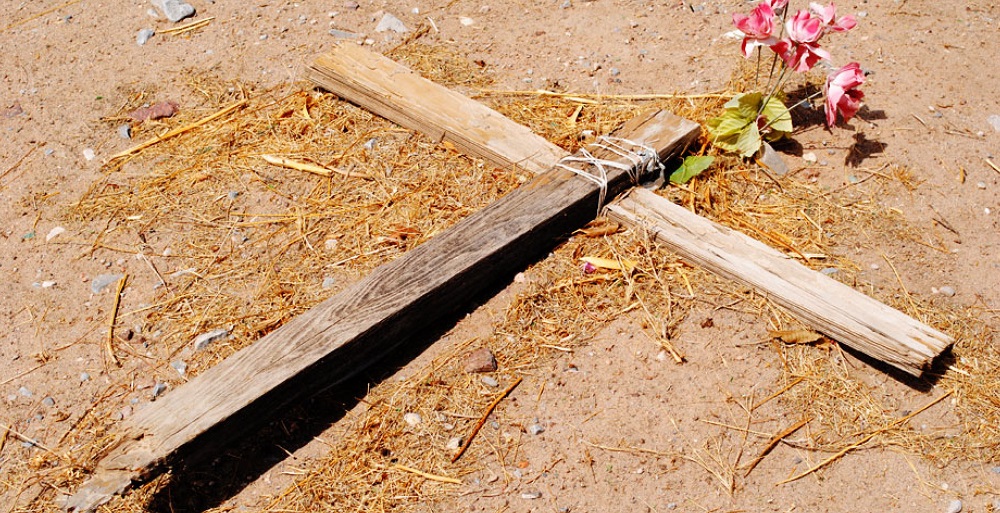 Broken wooden cross lying in the dirt at Canutillo Cemetery in El Paso. Taken by Brianna Hernandez for the Journalism in July workshop at the University of Texas, El Paso.

The winners were selected by DJNF staff from among nearly 500 participants in 25 summer workshops co-sponsored by colleges, universities, non-profit and journalists’ organizations. The students’ work appeared in newspapers or on websites produced by the programs.

Sophie Ho wrote about a family living with autism in The Mosaic, a broadsheet newspaper. The article, “Coping with Autism,” lays out the story of the Heathcote family, three of whose five children are autistic. The entire family participates in Angels on Stage, a musical theater company for children with special needs.

Sophie wrote about the effects of the assignment in her essay, “For the first time, I felt that I was writing something new and interesting. I was writing a unique story of a unique family. There was this sense of fulfillment in discovering somebody and giving them the chance to be featured.”

Joe Rodriguez, Mosaic director, wrote: “Sophie Ho was one of our pleasant surprises, a student whose talent busted out during the workshop. She has a natural curiosity about everything that journalism covers and smarts and skills to become a pro.

Corina Gallardo, was editor-in-chief of The Chronicle newspaper published by the Journalism Diversity Workshop for Arizona HS Students. She wrote the story “Ex-prostitute shines light on child sex trade.” It followed the life and troubles of a former prostitute and drug abuser who recovered, relapsed and recovered again, ultimately to work with a non-profit organization, which helps sexually exploited girls.

In her comments, workshop director Lisa Button said, “Corina Gallardo approached her story on child sex trafficking with tenacity. She interviewed a former prostitute and found sources in Phoenix after the Tucson sources were uncooperative. This is the best workshop story I’ve seen.”

Corina wrote in her essay: “Journalism is more than just an ideal occupation to me, but instead a responsibility. I aspire to be a part of the select few chosen to report news to my community and connect with the members of society in a way other fields cannot.”

The Peace Sullivan/James Ansin HS workshop at the University of Miami focused on “Social Media: The Good, the Bad and the Ugly.” Kayla Lokeinsky found a website that sells fake resumes and credentials to job seekers called careerexcuse.com. The company goes so far as verifying phony employment histories. She found the site and others like it are not illegal. Her story, “Lying to Get Ahead: Website tries to fix bad job histories with fake resumes,” is loaded with sources from an intellectual property attorney, a firm that conducts background checks and an applicant who falsified parts of his resume.

Dr. Fred Blevens of Florida International University, the workshop director wrote, “We thought this story would be impossible, but Kayla did an excellent job, even getting the Federal Trade Commission to weigh in.”

Kayla wrote in her essay, “I know that whether I’m reporting on sexism in sports or the latest fashion trend, writing and reporting are what I’m meant to do. To be able to attend college and pursue a career in journalism is a dream so close I can feel it.”

The MJP Journal, media outlet for the 28th Multicultural Journalism Workshop at the University of Alabama, provided blanket coverage of the aftermath of the April 2011 tornado that rampaged Tuscaloosa killing 52 people. Ymani Wince seized on a topic that deeply affected many of the victims – the destruction of trees, a vital part of the identity in Tuscaloosa, known as Druid City. She reported on the issue, covering a homeowners’ meeting with forestry officials and environmental groups about replanting trees and moving on. The result was “Windblown: To some, loss of trees more devastating than homes.”

Her work, attitude and ethic impressed workshop director Meredith Cummings, a journalist and college professor, whose own home was demolished and who blogs at http://blog.al.com/upbeat. Ymani pitched and pursued the story and pressed to be able to cover the meeting on deadline. She turned it all around in just two hours.

Cummings wrote: “If you ask me why I’m not moving back into my own house when it is rebuilt, I would tell you because the neighborhood had no trees. The loss of trees is nothing compared to the loss of life, but Ymani was able to accurately convey the feelings many of us had. I can deal with losing my house, but the 100-year-old trees in my yard are irreplaceable!”

Anthony Cave, University of Alabama, provided the entire web presence for the University of Alabama’s Multicultural Journalism Workshop and its MJP Journal. Workshop director Cummings also noted he produced several videos, among them, one on the 75th Anniversary of the Alabama Scholastic Press Association.

Cummings wrote of Cave, “Anthony came into our workshop, ideas blazing. He singlehandedly coordinated our multimedia efforts and designed the website not only for computers, but also for tablets, like the iPad. His work was above and beyond.”

Anthony’s essay provided a glimpse into his mindset: “The joy of journalism is waking up every day and having an infinite amount of topics to cover … I consider college the intermediary in that process, where I both send and receive work. In time, however, I will do it all.”

Cosette Perez, wrote about the fascination with gruesome images on the Internet in, “A Web Full of Gore: Snooping citizens infect the Internet with shock photos.” Her video “Bloody Voyeurism” shows footage of war, crime or youths fighting, interspersed with commentary from a guidance counselor and a high school student about the disturbing attraction to the material.

Director Dr. Fred Blevens wrote of her work, “Complex story with excellent scripting and editing. Our sponsors were stunned at the quality and impact of this piece.”

Cosette wrote, “My father is a journalist and I was always intrigued by the field. But something that I noticed very quickly is that journalism is something that requires a lot of sacrifice and love and passion. I honestly believe that I have plenty of all three.”

Brianna Hernandez photographed a broken wooden cross lying in the dirt at Canutillo Cemetery in El Paso for the Journalism in July workshop at the University of Texas, El Paso. The story, “In search of answers: Volunteers take matters into their own hands at local cemetery,” co-written with Evelyn Villareal, outlines the wrenching struggle of volunteers to fend off blight and encroachment at the Roman Catholic Diocese-owned burial ground. The volunteers whose loved ones are buried there want help from politicians, the Church and other citizens.

Brianna wrote in her essay, “The journalism field is increasingly competitive especially during these difficult economic times. Current trends in journalism require a ‘back pack journalist,’ one who is the whole package.”

Dr. Zita Arocha, director of the workshop, wrote: “Brianna left the workshop with a new level of commitment to photography and multimedia journalism.”

Brian Nguyen loves the camera. He declared in his essay, “I will run toward screams, cries and fire. I will speak for those who cannot. I will show the world that there is still work that must be done. The story must be told, and I will tell it with my camera. I will be a witness.”

Joe Rodriguez, who directs the Mosaic workshop, explained that Brian and other workshoppers happened onto the story about a fire at a fraternity house. “Brian was running with Mosaic students one morning when they came across a burned-out fraternity house and ran back for his camera. He has ‘the eye’ photo editors look for.”

His picture captured homeless frat brothers hugging as they waited to hear where they would be housed. It accompanied the story, “Fire devastates SJSU frat house.”