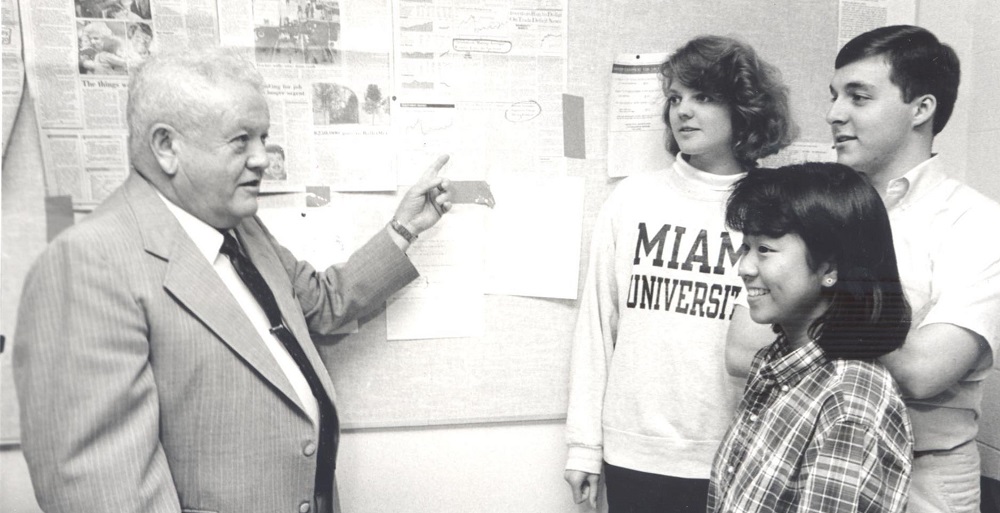 John J. Clarke, Ph.D., 90, was laid to rest September 1, in Scranton, Pa. He directed a copy editing crash course for the Dow Jones News Fund from 1970 to 1991 at The Ohio State University, training more than 200 journalists.

A World War II veteran, he joked that he pursued a doctorate in American and English literature at Brown University while working nights at the Providence Journal because he had some of his G.I. Bill left. He worked for 18 years as a reporter and editor at papers including the Baltimore Sun and Scranton Times before joining Ohio State’s faculty in 1967.

Although he left OSU, Clarke continued to teach journalism at his alma mater the University of Scranton for several years afterward. When he retired from directing the Fund’s program, an article, excerpted here, appeared in the Winter 1992 AlumniNewsline.

“Journalists are part of a tradition rooted in literature and students must realize it,” he said.

He also liked to have a little fun.

His students have been summoned back from a break with a line from Henry V: “Once more unto the breach, dear friends, once more.”

He was the police and city hall reporter who reported from a house where a crazed bank robber was holed up. The writer back in the office was Ben Bagdikian. Clarke remembered the eight reporters got $200 apiece. For $50 he bought a portable Royal typewriter that he still uses.

His 40-year-old Royal notwithstanding, Clarke ushered the electronic age into journalism education. Impressed by what he saw at The Detroit News in 1969, he convinced OSU to install computers, making the school the first with a computerized system.

Clarke followed the advice from a favorite Alexander Pope quote: “Be not the first by whom the new are tried, not yet the last to lay the old aside.”