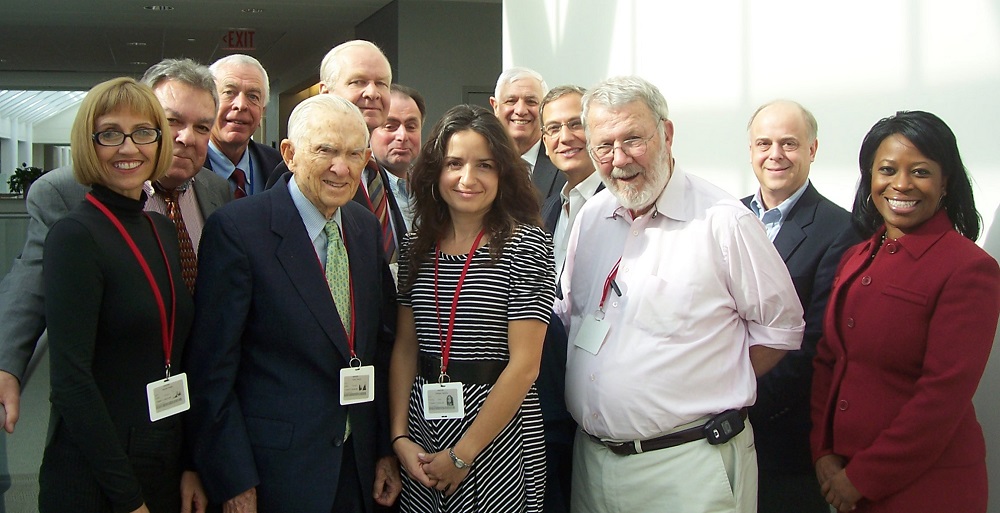 Meeting of the Dow Jones News Fund board of directors on Nov. 4, 2011.

PRINCETON, N.J. — The board of directors of the Dow Jones News Fund has approved $432,000 in grants and operating expenses for its 2012 programs that include professional internships this summer for college students, digital training for journalism professors and workshops for high school students.

The Fund, which has been successfully promoting careers in journalism for more than a half century, expects to provide more than 70 paid internships for college juniors, seniors and graduate students in its news, sports, digital editing and business reporting programs. To prepare students for their summer jobs, it will operate six Centers for Editing Excellence on university campuses across the country and a training center in business reporting at the New York headquarters of Dow Jones & Co., a unit of News Corp.

The budget also includes $42,000 for training programs in digital media for faculty at historically black colleges and universities and at institutions with large Hispanic enrollments. These will again be held at Western Kentucky University directed by Dr. Pam Johnson and at the University of Texas at El Paso under the direction of Dr. Zita Arocha. A major aim of this effort is to provide journalism professors with the skills they need to produce more and better qualified applicants for News Fund internship programs and professional news organizations.

“At a time when news organizations are facing serious financial and technological challenges, our internship programs help ensure that the next generation of professionals possess the skills required to produce high-quality journalism and keep American journalism strong and free,” said Richard J. Levine, president of the News Fund.

In addition to the money for faculty training, the board approved major grants for:

COLLEGE PROGRAMS – $230,000
The Fund’s Editing Intern Program will train college students to work as news, sports and digital editors during the summer of 2012. Each student will attend a Center for Editing Excellence prior to the internship. The Fund allocated money for intern travel and operating costs as well as for $1,000 scholarships for those interns returning to school to complete their undergraduate degrees.

Up to eight students will be awarded $1,000 college scholarships for the best writing, photography and multimedia package produced in the 2012 summer high school journalism workshops.

HIGH SCHOOL TEACHER PROGRAMS – $10,000
National High School Journalism Teacher of the Year–$3,000 was allotted for scholarships to be awarded in 2012 to students of five high school journalism teachers chosen as best in 2011.  An additional $7,000 was granted to promote the program through travel and speaking engagements for the Teacher of the Year at news industry, scholastic and academic conferences. The program will receive in-kind support from the Poynter Institute for Media Studies, Columbia Scholastic Press Association and The Wall Street Journal Classroom Edition. The postmark deadline for teachers to apply is July 1.

GENERAL OPERATING EXPENSES AND CAREER INFORMATION – $30,000
The Fund will update and reprint “The Journalist’s Road to Success: A Career Guide,” its sister publication in Spanish “La ruta al éxito del periodista,” as well as its booklet on starting high school newspapers, In the Beginning. More than 5,000 high school journalism teachers, college professors and media professionals will receive Adviser Update, the free quarterly newspaper on journalism education and major media issues published by the Fund.