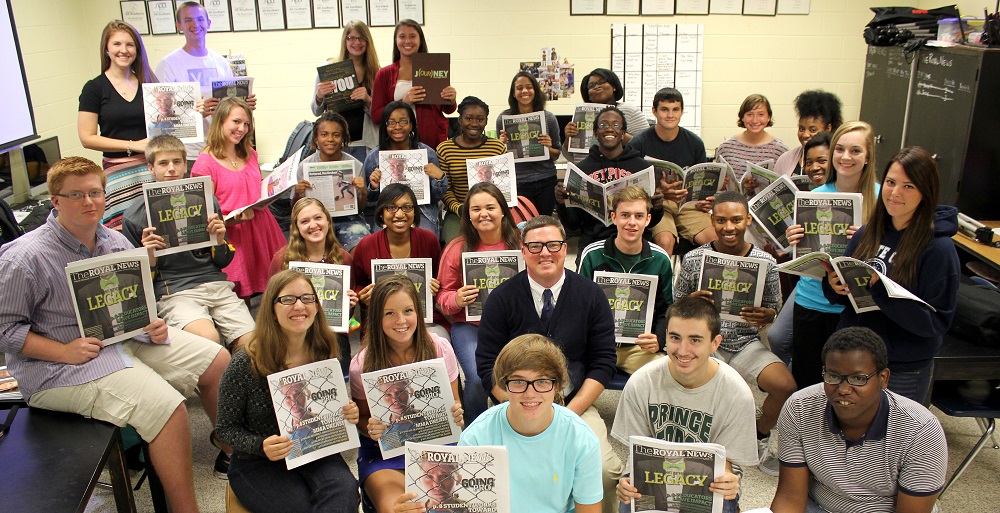 Mr. Waugaman advises the award-winning The Royal News and trnwired.org website. A journalism teacher for 17 years, he holds numerous honors nationally, regionally and in Virginia. This spring, he received the Gold Key from the Columbia Scholastic Press Association, a co-sponsor of the Teacher Awards program.

He commended previous teachers of the year Jim Streisel, Ellen Austin, Aaron Manfull and Valerie Penton Kibler. He said, “I am very honored. Jim has done a wonderful job. So have Ellen, Aaron and Val. I look forward to carrying the torch.”

Linda Shockley, managing director of DJNF, said, “Chris Waugaman is a passionate, cutting-edge media teacher and adviser. He believes in and promotes diversity.”

Mr. Waugaman said he plans to emphasize the importance of the media classroom as the center of project-based learning and the standard for the “21st Century English class.” He wrote in his application, “ We need to protect our electives and guard against subversive plans to do away with publications that do great investigative journalism.”

He was selected by a panel that included Richard S. Holden, DJNF board member and former executive director; Diana Mitsu Klos, DJNF board member and executive director of the National Scholastic Press Association; 2013 Teacher of the Year Jim Streisel of Carmel (Indiana) High School, and Dr. Calvin Hall, chair of the journalism department at North Carolina Central University, Durham, and chair of the Scholastic Division of the Association for Education in Journalism and Mass Communication.

Mr. Waugaman will speak and receive a plaque and a laptop computer for his classroom during the National High School Journalism Convention, Nov. 8 in Washington, D.C. In addition, a graduating senior at Prince George High School will receive a $1,000 scholarship in his honor. He will also have access to webinars from the Poynter Institute for Media Studies in St. Petersburg, Florida. CSPA will underwrite his participation in its spring convention in New York City where he will speak and present workshops.

The Fund will also honor four Distinguished Advisers and four Special Recognition Advisers in Washington. Mr. Waugaman was a DJNF Distinguished Adviser in 2011 and one of his students received a $500 scholarship. These honored teachers receive access to Poynter Institute webinars plus subscriptions to WSJ.com courtesy of the publishers of The Wall Street Journal.

The Fund began the National High School Journalism Teacher of the Year program in 1960. More than 300 teachers have been honored since it began.