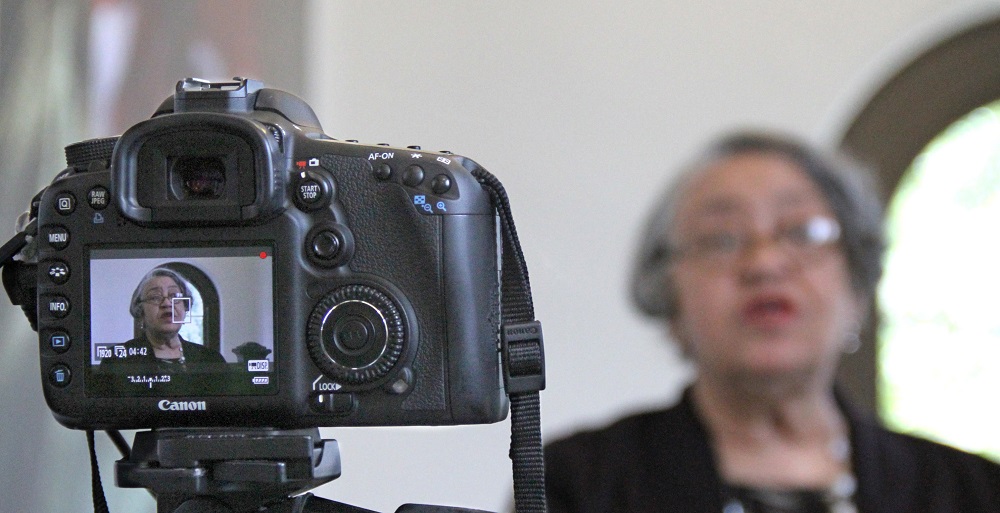 Photo taken by J.R. Moody of Mrs. Jeanette Smith at the Remembering “Freedom Summer” Workshop at the University of Southern Mississippi.

The Dow Jones News Fund, a nonprofit foundation that promotes careers in journalism, provides grants for High School Summer Journalism Workshops. Each year more than 400 high school students from across the country attend one of these workshops. From these participants, a select few are nominated for one of eight $1,000 college scholarships.

“In awarding these scholarships, the Dow Jones News Fund looks for students who exemplify the skill and passion to pursue a career in journalism,” said Linda Shockley, managing director. “Each shows great promise and enthusiasm. We are excited to see the rich journalism they will produce as they practice the craft.”

Teresa wrote in her essay that she is inspired by Asian-American journalists like Laura Ling to debunk Asian stereotypes and “speak out against injustice.” She started pursuing journalism freshman year as a writer for the high school newspaper The Stuyvesant Spectator, and worked her way up to editor-in-chief by senior year.

Teresa added, “My experience in the Urban Journalism Workshop at NYU has furthered my love for journalism…I learned how to break out of my comfort zone and approach strangers for man-on-the-street interviews.”

Charlene Torres – Bridgeport, Conn.
Charlene Torres participated in the Connecticut Health Investigative Team (C-HIT) workshop hosted by Yale University and the University of Connecticut. In her story, “Chlamydia Rates on the Rise,” Charlene showed her maturity and skill while reporting on the recent increase in sexually transmitted diseases among teens in Connecticut.

Charlene, a senior at Achievement First Amistad High School in New Haven, overcame many challenges growing up in the foster care system. Charlene was determined not to become another statistic; through hard work and dedication she is beating the odds. It’s her passion for writing and journalism which led Charlene’s teachers to nominate her for the C-HIT Summer Boot Camp.

Their instincts proved to be spot on. Workshop director Lynne DeLucia said Charlene impressed from the first day, showing a knack for taking notes and asking the right questions.

After completing the weeklong program Charlene is more confident than ever.

“I can’t wait to go to college, to become a broadcast journalist and to show myself and other kids like me that if they set their minds to a goal they can achieve it – even if they get sidetracked, it’s never too late.”

Raegan Johnson – Gulfport, Miss.
According to Gina Chen, former director of the University of Southern Mississippi Multimedia High School Journalism Workshop Raegan “is the type of person whom we need in journalism.”

Raegan’s winning article was “High school journalists learn the ropes.” According to Chen, it reflected the high level of reporting, writing, and story organization ability she exhibited throughout the workshop.

Raegan wrote in her essay that “Journalism has been one of my passions for many years.” But it was her time at the Remembering “Freedom Summer” workshop that has focused her on pursuing a career as an investigative journalist or news broadcaster.

Raegan is a senior at Biloxi High School where she has served as an editor for the Indian Echo yearbook for three years. She is determined to attend college in the fall and major in journalism.

J.R. was nominated by Gina Chen, who wrote, “His picture honestly blew us away because of its artistry.”

J.R. produced several captivating photos in the workshop’s slideshow but it was his photo of Mrs. Jeanette Smith that showed his keen eye and skill. He wrote that after taking the winning photo he knew, “Journalism will be my future.”

J.R. will also have some personal guidance along the way from his cousin and mentor Boyzell Hosey, the director of photography/multimedia at the Tampa Bay Times.

Grace King – Miramar, Fla.
Grace King has been involved in journalism since the eighth grade, primarily through her work at the high school TV station and as vice president of the Quill and Scroll chapter at American Heritage School. As part of her school’s broadcast journalism/production track she has earned more than 50 awards, including a high school Emmy for video editing.

It was her picture for Miami Montage, published by the Peace Sullivan/James Ansin High School Workshop in Journalism and New Media at the University of Miami, which earned her DJNF scholarship.

Grace’s photo captured the emotion and hardships undocumented parents and children face and the sacrifices they must make. She was part of a team that covered a protest in support of an undocumented immigrant facing deportation. Workshop co-director Frederick Blevens said, “She came away with the hands down choice for the issue’s cover photo.”

“Journalism possesses the power to change both the world and the way society perceives it,” Grace wrote. “One day, I want to accomplish both of these objectives through my work as a journalist.”

Kennedy Huff – Pflugerville, Texas
At age 13 Kennedy Huff joined a teen radio show in her hometown and found her true calling. “It took just one experience behind a microphone to realize a career in broadcast journalism was the only career for me.”

Newsradio WCBS 880 reporter Levon Putney agreed. He wrote in his recommendation, “Many people are as driven and intelligent as Kennedy Huff, but her easy-going and inquisitive nature sets her apart when it comes to getting the best out of stories and sources.”

In “Face of Hunger,” Kennedy visited The Food Bank for Central and Northeast Missouri and conducted compelling interviews with employees and customers.

“I want to provide a voice for the voiceless,” she wrote in her essay. “I see my journalistic and humanitarian duties as producing thought-provoking news pieces that cast a light on matters causing distress for people.”

“There are endless stories to be told throughout this country and the world,” Bria wrote. “Journalism would give me the platform I would need to tell these stories and to enlighten the public about current events that affect their everyday lives.”

For Bria’s project at the University of Southern Mississippi, she produced a well-crafted multimedia story about civil rights activist Jeanette Smith. Her interviews and photos can be viewed on the workshop website, http://southernmisshsworkshop.weebly.com/.

In addition to attending the summer workshop, Bria also interned at The Jackson Free Press. Last fall she became editor of her high school newspaper, The Bear Facts.

Aubrey Hoffman – Homestead, Fla.
Aubrey Hoffman’s three weeks at the Peace Sullivan/James Ansin High School Workshop in Journalism and New Media at the University of Miami gave her a new perspective on journalism and opened her eyes to a host of opportunities.

Aubrey put her new editing and design skills to good use in “a moving piece” for the Miami Montage that focused on an imprisoned undocumented immigrant and his family. Her video can be seen at http://vimeo.com/101641472

After majoring in journalism in college Aubrey plans to hit the ground running. “I will wake up every morning with a smile on my face and a new hunger to tackle the next breaking news.”