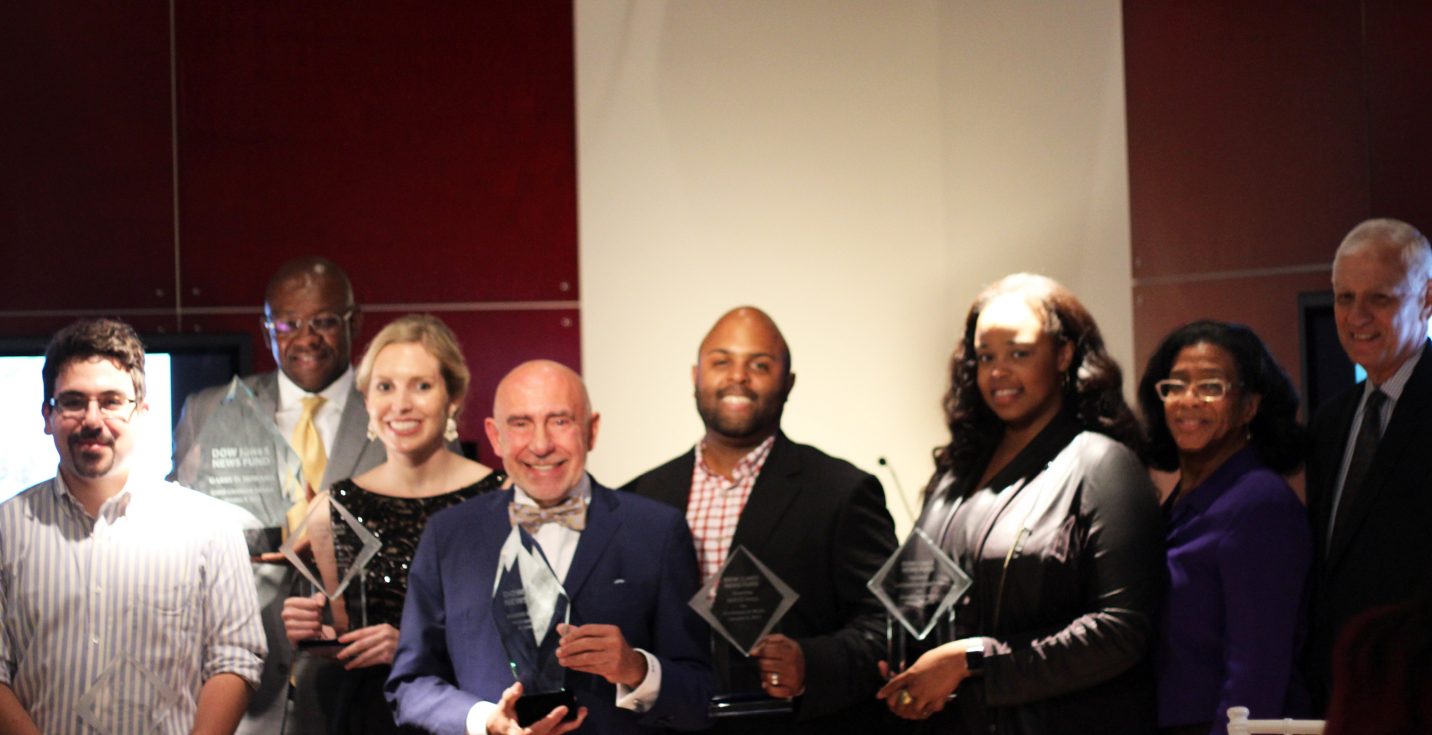 PRINCETON, N.J. — Journalists and media leaders joined the Dow Jones News Fund at its first Alumni Awards Reception Oct. 9 to celebrate six outstanding professionals who are making their mark in the industry.

García credited the Fund for two pivotal moments in his career: The first was in 1968 when he was a reporting intern at The Miami News, perhaps the first Cuban-born reporter covering ‘Little Havana’ during a tumultuous time. He learned the art of reporting and the power of how news is packaged. The second was in 1972 as a fellow in the Fund’s program for college educators when he was drafted to teach news design to other fellows. From that moment on he never stopped teaching and designing. Today he is working on his 706th media design project.

García said, “I don’t know what the Dow Jones News Fund means to anybody here, but to me personally, it is living the American dream. I am very proud of this award and it means a lot to me.”

Garry D. Howard, director of corporate initiatives at American City Business Journals, accepted the Game-Changer Award for his dedication to breaking down barriers and mentoring the next generation of journalists. Howard interned in 1981 at the Dow Jones News Service and has held several leadership positions at a host of media companies. In 2015, he initiated a partnership with the Fund to train business reporting interns for ACBJ.

Howard said, “I want to thank the Dow Jones News Fund, because this is a very special, fantastic program, and any young person that comes through this program will be excellent. I have no doubt in my mind.”

The Fund also presented four Excellence in Media Awards. The recipients were:

Royce Hall, West Coast advertising director at Thrillist Media Group, was a 1997 and 1999 alum of the business reporting and news editing programs. After his internships and while working at The Wall Street Journal, Hall directed the business reporting program for the Fund. He highlighted the Fund’s role in emphasizing writing and editing, two skills critical to his success working in content development, marketing and sales.

Hall said, “I feel like I grew up at Dow Jones. I think so much for me is owed to the Fund and to the experience of also my really close friends having come from this program. It is really a great feeling to be part of this.”

LaSharah Bunting is senior editor of digital transition at The New York Times, where she interned in 2000. As an expert, she advised the Fund on its digital and data journalism internships. She is a trusted adviser to her alma mater at the University of Nebraska and an advocate for digital literacy.

Bunting thanked the Fund for putting her on a successful career path:

“My Dow Jones News Fund internship was so pivotal to my success. It helped me get my first job out of college at the Dallas Morning News, and then helped me get a job at The New York Times as an editor at the age of 25. And I am now part of a new team at The New York Times handling our digital transition and examining our way forward, and it began with that Dow Jones News Fund internship.”

Ashley Thomas, East Region Day Supervisor for the Associated Press, is a 2007 graduate of the University of Missouri’s School of Journalism. She interned at the Associated Press in New York City. Her performance was so impressive she was hired at the end of her internship, and she was named an Edward Trayes Scholar.

Thomas said, “I’m so grateful to the Dow Jones News Fund, not only for this award but for the opportunities it has provided me through the internship program. The News Fund changed my life.”

Vinny Vella, staff writer for the Philadelphia Daily News, interned as a copy editor at The Denver Post through the Fund in 2012, one of that paper’s most tumultuous summers. He worked the desk on devastating wildfires and the horrific shooting at an Aurora movie theater, for which he was part of the Pulitzer-Prize winning team.

Vella praised the Fund for its role in training and mentoring him:

“The Dow Jones News Fund is a treasure. I can’t begin to thank everybody who is involved in making it a reality because I would not be here today without the Dow Jones News Fund. The training that you receive and the people that you meet, they are experiences that you have will last a lifetime…and my career is better for having been a part of it.”

Since 1960 the Fund has trained more than 9,000 journalists through its college internship program. The application deadline for the Fund’s 2016 summer internship programs in data journalism, digital media, business reporting and news editing is Nov. 3.