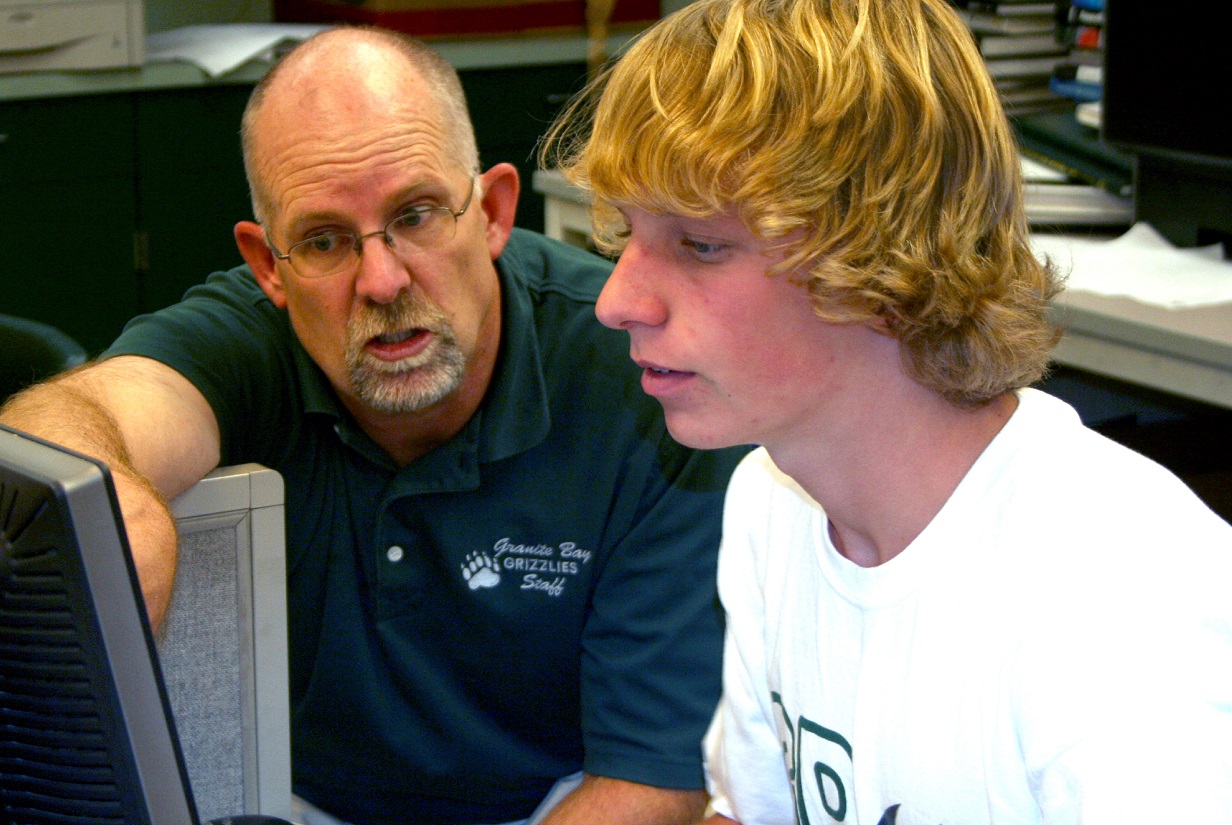 PRINCETON, N.J. — Karl Grubaugh brings real-world journalism to life in a special quarter of the craft — the high school newspaper. For his methods, his experience and the results, the adviser of The Granite Bay Gazette at Granite Bay (Calif.) High School, was named the Dow Jones Newspaper Fund’s 2008 National High School Journalism Teacher of the Year.

Richard S. Holden, executive director of the Fund, said, “Karl Grubaugh is exactly the right journalism teacher of the year for our times. He’s a man with a great journalism education and on-going professional media experience. He can bridge secondary education, the academy and the professional press when we’re all charting new courses.”

Karl Grubaugh in front of the classThe program honors the nation’s top journalism teacher, four Distinguished Advisers and several teachers cited as Special Recognition award winners. A panel selected Mr. Grubaugh and seven other teachers based on submissions by 36 teachers that included their student publications, résumés, letters of recommendation and responses to 14 questions posed by the Fund.

Grubaugh sees teaching as an art not a science. He has found emphasizing the glory days of journalism at Granite Bay inspires his staffs to raise the bar with each cycle of publications. “We try to make it real world, a real-world product with real-world advertisers, real-world readers and real-world deadlines. With that comes an opportunity to do real-world work that is engaging,” he said.

The Granite Bay Gazette, a full-color multi-section broadsheet and tabloid ranging in size from to 44 to 56 pages, publishes eight times a year. The paper has won prestigious scholastic journalism honors including the George Gallup Award from Quill and Scroll Honor Society and the Gold Crown from Columbia Scholastic Press Association.

Though many of his students and staffers have become professional journalists, hundreds have not but he believes they are better for the experience.

“The only place where kids get to do what they do on a high school newspaper is in athletics. They work on their skills, the coach is off the field and they are the ones who are doing it. It’s an opportunity for academically skilled kids who are writers and editors to use those skills and be read by 2,500 people,” he said.

The panelists were: Linda Puntney, executive director of the Journalism Education Association; Jim McGonnell, 2007 National High School Journalism Teacher of the Year, Findlay (Ohio) High School; Rex Smith, vice president and editor, the Times Union, Albany, N.Y., and chair of the American Society of Newspaper Editors’ High School Journalism Education Committee; Candace Perkins Bowen, scholastic division chair for the Association for Education in Journalism and Mass Communication and executive director of the Center for Scholastic Journalism at Kent State University (1989 Teacher of the Year), and Diana Mitsu Klos, senior projects director at ASNE and a member of the Fund’s board of directors.

Grubaugh will accept his award at the November convention of the Journalism Education Association/National Scholastic Press Association in St. Louis. He will also attend the annual meeting of the American Society of Newspaper Editors and the college-level Association for Education in Journalism and Mass Communication. The Teacher of the Year is also a keynote luncheon speaker for the Columbia Scholastic Press Association, a co-sponsor, in New York City each March. Additionally, the winning teacher can attend a professional-level seminar offered at the Poynter Institute for Media Studies, St. Petersburg, Fla., and is a paid columnist for the Fund’s free quarterly newspaper, Adviser Update.

The Teacher of the Year and four Distinguished Advisers will receive free subscriptions to The Wall Street Journal Classroom Edition, a co-sponsor, which includes 30 copies of the full-color newspaper for students, a free Teacher Guide, unlimited access to the Classroom Edition Web site and a daily Journal. Poynter Institute will also give the top teachers and their students access to webinars through its NewsU journalism training project.

Grubaugh has been advising media at Granite Bay for 12 years. He holds a master’s in journalism from the University of Missouri, a bachelor’s in American Studies from the University of Canterbury, Christchurch, New Zealand, and a bachelor’s in Social Science from California State University, Sacramento. He is a freelance writer and editor and has worked for The Mountain Democrat, Placerville, Calif., the Columbia Missourian, and as an on-call copy editor on the news, sports and features desks at The Sacramento Bee.