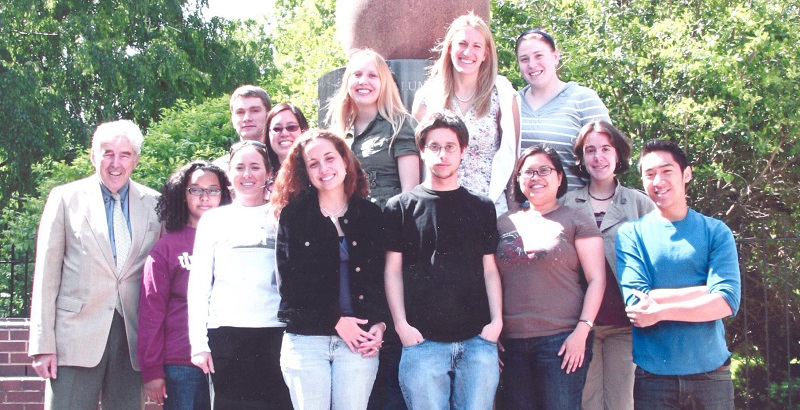 PRINCETON, N.J. — Ashley Thomas walked onto the national desk at the Associated Press as an intern in New York City last summer and secured a full-time job. To top it off, she has been named the 2008 Edward Trayes Scholar. She will receive a $1,000 scholarship.

Trayes chose her because of her performance on his legendary geography quizzes (one assignment was to transform a blank map of the Soviet Union into one of current-day Russia). Her consistently solid editing and her headline-writing ability during the two-week training course and the great reports from the AP clinched her selection.

Thomas, a University of Missouri journalism graduate, said she was humbled and surprised to win the honor. “The people at the residency were so smart and they’d traveled a lot. It could easily have been one of them,” she said.

Paula Froke, AP deputy national editor, called. Thomas “a star headline writer.” She said she offered her the job a little more than a month after her internship began because of her outstanding skills and the rapid changes within AP. Thomas seemed to follow Froke’s path; she was trained as a copy editing intern by Trayes nearly 30 years ago and hired by AP after her internship — in New York.

“We were losing some people so I needed to fill the gaps but it is something I wouldn’t have done with any old intern. It wouldn’t have happened if she hadn’t earned it. To succeed at the AP you need a combination of really strong editing skills and to be able to write, really well and quickly. Ashley just brings all those elements.”

Even though the residency program was intense (the Russian map assignment made her cry), she also credits editing the Columbia Missourian and classes with Mary Lawrence and Maggie Walter for preparing her.

Not that working on the national desk wasn’t intimidating. During the summer she re-wrote staes stories into national ones starting from scratch, picking through the archives, working with reporters and trying to meet deadlines for 10 to 15 stories ranging from 130 to 1200 words each per shift. “I feel Dr. Trayes instilled a lot of confidence in us. I thought, if he believes in me, I can do it,” Thomas said.

As a national editor, she got a chance to prove she could do the job on Christmas Eve. She was running the national desk when the killer Santa story came in from California. She described an intense news cycle with constant reports of the number missing, wounded and feared dead. Her efforts won the headline writing contest for that week.

Thomas advises prospective interns to be willing to pitch in, to be pleasant to work with, maintain a good attitude and a strong work ethic. Demeanor on deadline and skill combined paid off for her. She assigns stories each afternoon to re-write, back reads them, then sends them “on to the world” each night.

Ten years ahead in her career Thomas would still like to be editing adding, “I think it would be fun to be a manager.”

The Trayes award was endowed in 2004 by Terry O’Toole, who was trained by Dr. Trayes in 1979. Mr. O’Toole, who interned on the copy desk of The Wall Street Journal, is co-managing partner of Tinicum Capital Partners II, LP.